Since Sim Update IX I have about 30% FPS less than I have used to had, in all planes (also default ones), all around the world. 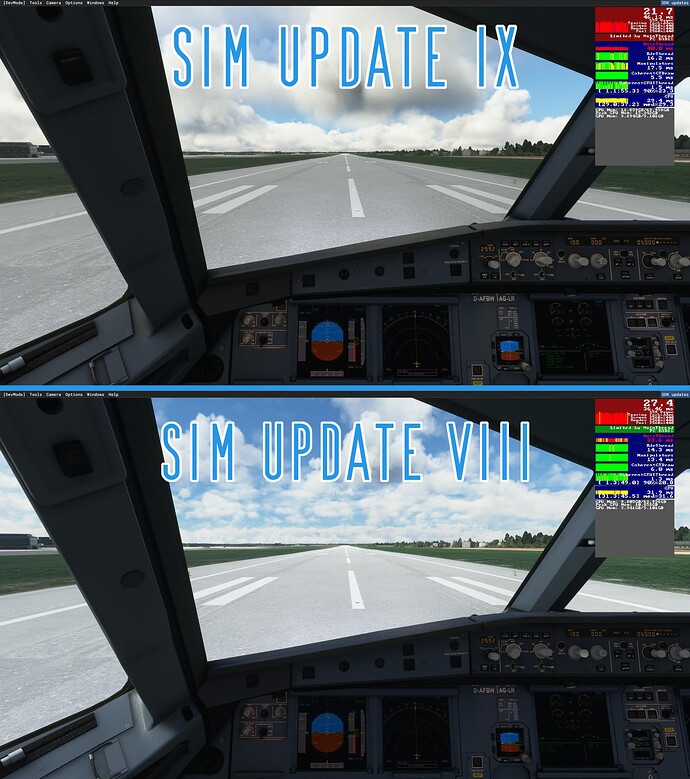 There were many discussions about performance issues in the beta section, most of which have probably been archived and closed by now, with votes lost.

The performance survey results are hidden and can only been viewed by Microsoft/Asobo, so we can’t know the overall performance effect of the update on the community.

You might want to tune in to the Q&A session on twitch tomorrow. Performance was a top voted question so Jayne might ask it.

The frame time in SU9 is awful, dropped frames all over the place.

Agreed. i use vr reverb g2 and the performance has dropped a ton.

same here. not sure if its the sim update 9 or the new nvidia driver 512.59 thats causing problems right here. but yes, an easy loss of 30-40% f performance … yikes

Likewise, near the ground…was locked at a smooth constant 30fps prior to update, now loosing up 30 to 40% fps when flying low.
Very disappointing.

I tried with both drivers…same degradation in fps.

yep, i have tested too… same ascertainment

Did the Beta testers isolate the cause? The new cloud rendering perhaps?

I beta tested SU9 and up to the start of the beta had always had clouds set to Ultra on a high-end machine. As I’m sure you’re aware, the clouds have had a significant upgrade and as such I would highly recommend you drop your setting to ‘High’ for SU9. They still look amazing (much much better than SU8) and I found I got my performance back.

I have a 2080ti and now believe Ultra clouds are the preserve of the 3080ti and above, as it should be. If you can tell the difference anyway I’ll give you 10 pence.

For me, it’s not about clouds. I have same FPS with clear skies as with cloudy sky…

So are you testing the exact same scenario that you are using to compare SU9 to SU8, or do you just perceive it to be worse?

I’m finding the release candidate we got yesterday is performing better than it was as the last beta build.

Of course I am comparing same scenarios. Performance loss is on every plane, all around the world, mainly over bigger cities - but the last thing is just my assumption.

Unless it’s exactly the same then any perceived differences between SU8 and SU9 are just anecdotal.

Remember too that performance can often be worse immediately after an update as more people are playing/updating so there’s more pressure on the servers. If settles down after a couple of days.

Except from weather (which does not have effect on my system) yes. When performance is worse about 30% there’s no need to achieve full similarity. We could talk about impacts of traffic, time, dew point or whatever if performance was different in 0-5%, not in 30%. These are the very basics of all testing

Also there’s big misunderstanding in MSFS community. Network speed or server load does not affects users performance in game. So testing in the day of update does not make any difference.

Ditto…flying around Sydney (Tampa version), was a very smooth 30fps…now drops down to the very low 20’s. I have a Ryzen 9 5900x, RTX3080ti with 32GB ram.
I am experimenting with dropping all my settings…so far very little assistance…will keep trying.

Server performance absolutely impacts how the game performs. It has a direct effect on the MainThread, and if the servers aren’t working as they should slowing down the MainThread will cause issues in your game.

I’m sure you get my point though regarding what you’re saying. . You state you’ve lost 30% of your fps, but compared to what? Unless you are comparing it to a known benchmark in SU8 it’s impossible to verify a general statement like ‘my performance is 30% worse’.

There are millions of users of FS2020. If we’d all lost 30% performance people would be going ballistic.

For me there’s a pretty big impact on performance. This seems worse than SU9 beta? I’m getting somewhere around 5-maybe 10% CPU usage and 35% GPU? Huge stutters- FPS around 20s. Running on 3090 + 10900k on <4K. Can’t even begin to think about running AIG LOL! Also getting repeatable CTD when trying to exit to main menu? I also had to uninstall the whole sim after a disastrous experience with SU9 beta. Hoping for a better day…

For me , major FPS hit only in cockpit view , and only in airplanes with HUD/ digital displays . Like going from stable 50-60 fps before update , to 20 fps . Exterior views are unaffected , stable 60FPS . Main CPU thread gets maxed out now in interior view … Some of those displays /hud using xml codes, and I think Asobo changed something and now all those xml related calculations overwhelm the cpu thread .