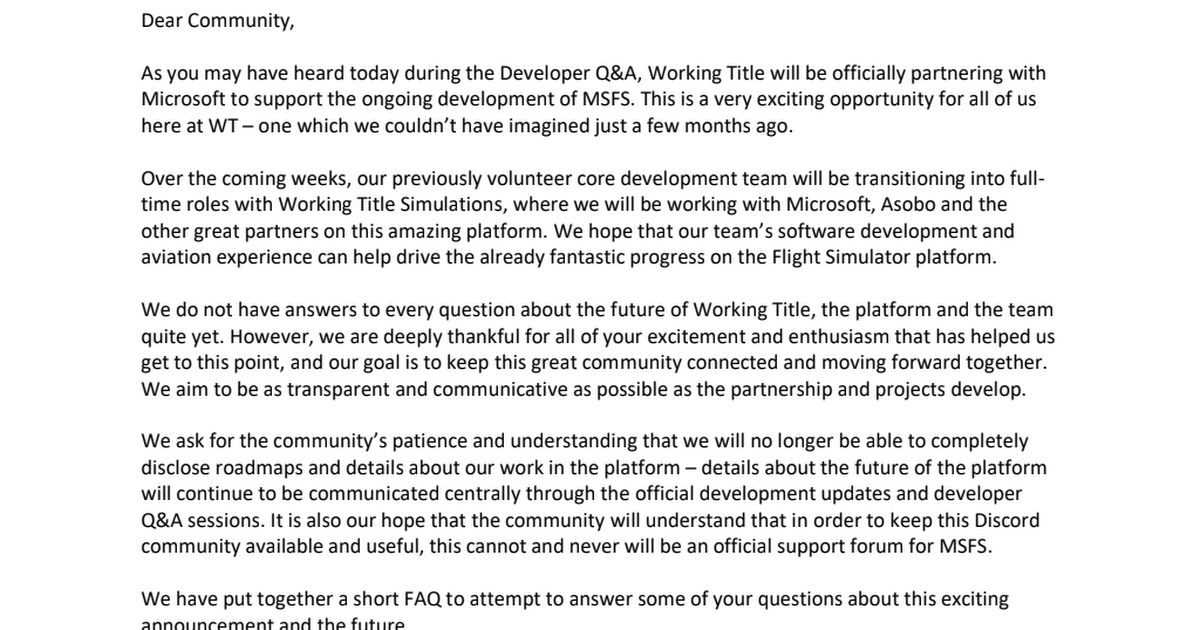 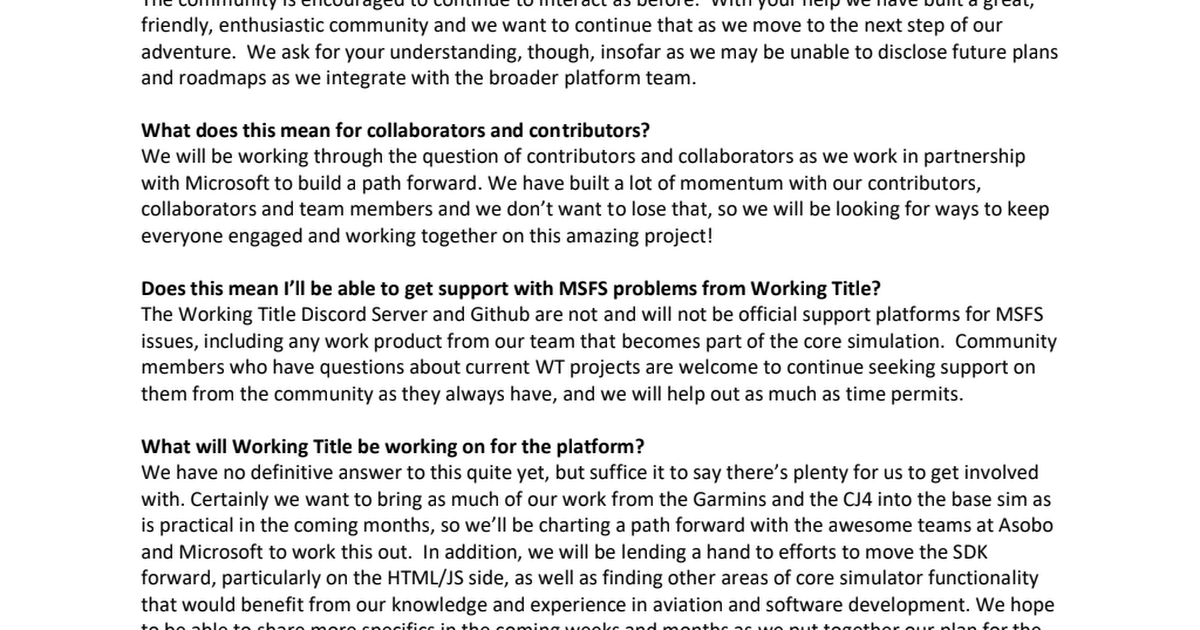 Twitch Segment with the Announcement (fast forward to 45:38 for those on Mobile)

This is sensational news.

WT in my view are first class software engineers. WT becoming an integral part of the platform, MSFS has just taken a quantum leap forward.

Wow what a ride were going to have. Amazing!! Super excited about this

Very wise move on the part of Asobo and Microsoft. Smart thinking.

Smart move by Asobo IMHO. They’ve demonstrated that they just don’t have the understanding of these systems in order to do it right themselves. So they’ve gone to people with far more expertise. I applaud this move.

Like for real…who thinks this is just a fun, soon to be abandoned project ? the community effort and the passion from Jörg drives this thing forward so massively. GREAT NEWS

The first thing I’m hoping to see is Asobo’s horribad flight planner / nav system replaced by WT’s code from the CJ4. That’s really the core of all the nav computer issues with all the planes in MSFS, including 3rd party planes.

Then I’d love to see them actually develop the interface for the Garmins in the base sim.

The part that makes me sad is that it will likely be months before we see these improvements in place. After playing with their G1000 0.4 Beta (which sadly doesn’t work with the latest update and won’t be updated farther), it’s hard to go back to even WT’s public / supported version of the G1000.

I strongly suggest you watch that part of the VOD on Twitch if you have some time after work (tbh, the entire 1.5 hours stream is well worth a watch, but I understand not everybody has time for that).

You’ll then have the first hand information from WT themselves, instead of relying on others here in the forum typing their interpretation of it.

Thanks for the info. I was hoping to see much improved systems with SU3, but it sounds like things will take time. Hopefully by year end, we will see some major changes.

At least we know they are pushing forward.

I plan to. I’ve watched them all so far, but unfortunately, none of them in real time. I always catch them later in the day.

I watched the Twitch stream…and announcement / interview which were very vague in describing exactly what WT was bringing to the table, even the short Q&A session on the topic did not give concrete answers…

Which is because it’s a new partnership, and they have a lot of details to iron out.

What they bring to the table was pretty clear to me; their mods are going to be integrated into the sim, and they’ll be working full time to keep building upon what they already created (they even quit their current jobs to work on this full time).

That’s actually pretty awesome really. The biggest down side, as stated in the FAQs, is they won’t be able to be as open about what’s going on with the public.

The one down side I see to their full integration is that they’re now bound by Microsobo timelines vs having the independence to do things their way at their own pace. For guys with other jobs doing this as a hobby, their responsiveness was amazing and one of the best parts of their model. Now if there’s an issue with the “mods”, we’ll have to wait at least till the next official update for a fix.

It’s a bit of a mixed bag - being OS and volunteer before meant they could have ended their development at any time due to real world competing requirements.

The flip side is they’ll eventually have to be fully integrated into the formal and less frequent release cycle process.

Overall this is a great development, but like anything else, patience is required as not all answers are available right now.And things will change. That is the only guarantee.

Hi friends, and thanks for the enthusiasm here. This is something we’ve been building to for a while and it’s great to finally be able to announce it and talk about it openly. In addition to the FAQ linked above we have a little announcement blurb which gives a few more details.

Beyond that, as for what we’re specifically going to be working on, I’m not able to give any concrete information or roadmaps at this point. But MS and we are in agreement on the general areas on which we should spend our time, and it’s the sort of thing that we’ve already been doing, meaning avionics, systems, and flight model improvements.

We do want to bring the improvements from our mods into the core sim, and find ways to apply them as broadly as possible while also working on other improvements. You’ll hopefully understand that I can’t give any more details than that at this point.

As for the current mods, we do have the ability to spend some percentage of our time during this transition phase on maintenance and bug fixes for the existing mods. So, while you aren’t likely to see (m)any more huge additions, they definitely are not going to be abandoned.

Can you please provide a link to the video

Thank you. I will add this to the top post to help clarify!

This is great news and a nod to the possibilities on the platform for developers like Working Title. Great progress!

Yeah, I can’t tell you how excited I am to be able to work on this stuff full time now. It’s was a bit of a scary decision to make, but it was also just about the easiest career decision I’ve ever had to make. There was no way I was going to say no.

The flip side is they’ll eventually have to be fully integrated into the formal and less frequent release cycle process.

One of the things we are going to be sorting out during the early days is the best way of integrating our workflow with the rest of the sim development. It probably will mean a reduction in the frequency of changes, yes. But we’d love to be just as nimble as we can within the confines of what we’re bound to do. How that works out remains to be seen.

Overall this is a great development, but like anything else, patience is required as not all answers are available right now.And things will change. That is the only guarantee.