I just took a couple of test flights following the latest update, and I love the new snow. However, the airports are covered in snow even if it’s not snowing outside.

Most airports plow and treat runways/taxiways and aprons during and after snow. So, having snow on these surfaces is very unrealistic.

Can we find a way to exclude snow from these surfaces, unless it’s actually snowing? Perhaps we can also exclude large roads and highways too?

I’d argue there should be some logic to this. If it’s still below freezing (really cold) surfaces won’t be snow free, but rather as they are reflected in the latest update. Above freezing (a la it snowed last night but warmed up) it would be a wet or dry surface depending on current weather.

My local airfields are hardly visible under the snow in the sim. There needs to be a clearing process.

Take a look at Flytampas Copenhagen for P3D, there the ground textures show snow on the sides of the taxiways etc while the taxiway itself is nearly snow free but with residue from the clearing. Something like that would be ideal

I would like to add, that snow should also be removed from certain bigger roads as highways and bigger rural roads.

That is nitpicking, but should be finally added.

I would agree with this. I flew out of Revelstoke yesterday and the runway was basically invisible. Paved runways at minimum should be cleared…I’m not sure what happens in real life on gravel runways but I’m guessing they tend to at least have some kind of runway edge markings so they are visible.

It seems like larger airport runways are cleared, CYFB was clear yesterday and taxiways had some snow on them, the effect was really nice.

The snow is a Great Leap Forward but more tweaking is needed.

So actually some runways, like from good 3d party devs, have cleard runways with a little bit of snow left, only standard ones are hard to see when the snow depths is growing over a specific value

Is this a celebration thread? Are comments that may be interpreted as negative by any forum member allowed without the post being hidden by flagging? Don’t know how the forum CoC can be consistently interpreted.

Therefore, here is a bit of shilling and nothing negative: my 9-year-old grandson thinks the snow feature is absolutely great? He thinks nothing needs to be changed expect perhaps random snow ploughs on taxiways and runways blocking the pathway of his plane or running through his plane to make the sim amusing in-between using x-plane for flight simming. I can use the sim to amuse him but I do not think that such amusement will result in the purchase of add-ons.
He sees no reason for an upvote and his enjoying the Xmas surprise.
Merry Xmas and a happy New Year to all FS2020 users. My condolences to those that are dissatisfied.

Reviving this thread. Snow on runways needs to be fixed (gone/cleared). Makes landing on shorter runways impossible, I just tried 5 times into BGGH Nuuk Greenland in the King Air. Each time, touched down at about 95kts and it just sailed down the runway never got below 70kts. I turned weather to clear skies no snow, came around for another try and bam, first go touched down nicely and stopped within 300-400m.

So what determines which Runways at a given airport have their runways cleared of snow ? 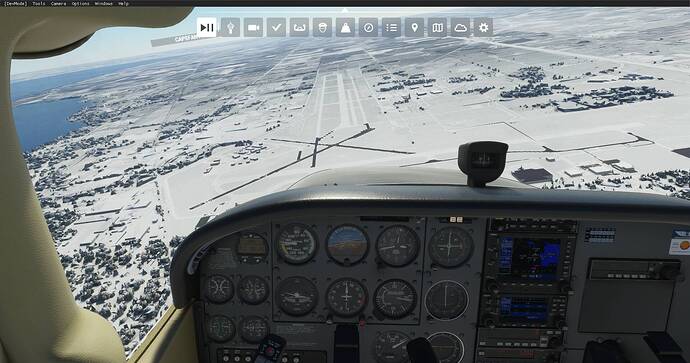 18/36 covered with snow, and this is the major ILS runway @ KOSH.
The runways that appear cleared are the “Closed” runways !!

Is this “set in stone” in the airport bgl file, or are there options to have all Runways & taxiways in the Sim cleared of snow ( and maintain the weather with snow elsewhere)

I believe its the type of surface. Asphalt seems to clear quickly, whereas concrete doesn’t. Also roads don’t clear as they should.

But these are ACTIVE Airports, and almost every airport in the snow belt, will have snow removal equipment to keep the runways clear.

It would seem that that factor has not been considered as far as Runway Snow coverage is concerned.

I actually ran into the same issue which SUCKED, needless to say, after doing a 3.5 hour flight from New York to Gander in Newfoundland. It looks like using reverse thrust is the only way to get the plane to slow enough to make your brakes useable and by slow I mean sub 30kts. Essentially, I had to bring the plane to a full stop on the runway. Also, coincidentally, I’m also flying the King Air.

Just as a little added touch, it would be nice if they added snow-plough vehicles that appeared at airports only when snowing, and piles of ploughed snow close to ploughed runways and taxiways

To approach New York, and see all the major airports with white , snow covered runways, just is “WRONG”.

I’d like to have an option to get rid of ALL snow even on live weather.

I 100% agree with removing snow from runways and taxiways and leaving behind a texture that somewhat indicates, that the runway has recently been cleared of snow. I just did a flight from Yellowknife CYZF to CYJM and I wasn’t able to find the actual runway in my first attempt because it was completely hidden underneath a layer of snow. That’s simply not realistic. Knowing Asobo this will either never or in a few month’s time be fixed. I hope this post gets more upvotes.

Hello,
Flying in Swirzerland with real weather and time is beautiful. Landscape covered with snow OK, but runways on airfield in altitude are not cleared of snow as they shoud be and are in reality. Makes landing difficult !
please correct.
Charcham