I installed the Hotfix yesterday. Since then I have had 4 CTDs. Two on launch, and two on approach. Prior to that I haven’t had a CTD in about 20 flights. This is the worst sim program I have ever owned and i have been doing this since the late 80.s

Be sure not to overclock your memory, CPU or GPU as MSFS hates overclocked hardware.
I tested this on 3 different systems and when overclocked, on 2 machines it led to a CTD’ while the other one wouldn’t even load the sim…

This is definitely a finicky piece of software, in my case I haven’t had a ctd in the past 340 hrs of flight and have had 3 total since August, I did have the performance issues but patch has fixed this, 4 flights, 12hrs and so far zero stutters or FPS drops, very smooth. Best experience in months for me

I don’t know if it’s placebo effect, but flew Orange County, CA this morning after new update and sim looks better and flies smoother (in VR) than ever .
Thank you Asobo! 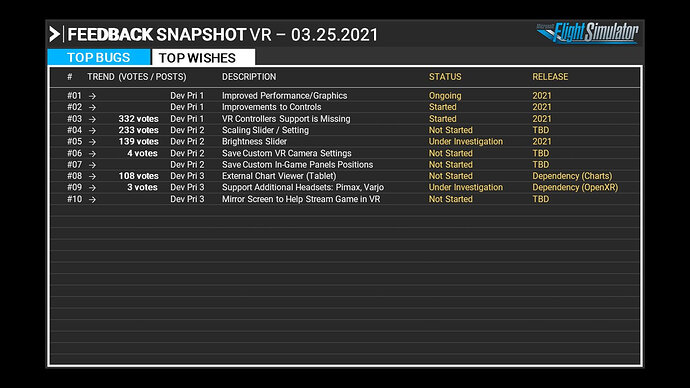 I’ve kept asking about the Snapshot VR is not reflecting the VR bugs, because it is omitting bugs with more votes, and some of the ones retained are named in a way which is not what they are reported for.

The quote above is best summing up the question I keep raising for month:

This raises the question whether someone is actually reading the reports and feedback users are providing, whether there is any consideration for the most important VR questions, or for VR topics in general (see below about LOD problems as well).

For example the table is showing:

But the following are not listed despite having more votes:

61 votes : Increase distance threshold to see other aircraft navigation and strobe lights at night
77 votes: Can you please add a “Sun Glasses” mode

The VR “wishlist” table is not changing for months, except the number of votes

Therefore I’d like you to please consider and escalate the following questions:

PS: the following topic back from October 2020 was engaging the community to better reporting in order to help Asobo tracking bugs. It was taking as an example the LOD problems I’ve extensively documented which are still present 5 months later. However it was closed:

Hi. So I was watching the Q&A today and Sebstian mentioned how he had difficulty tracking one of the bugs the community had brought up: https://www.twitch.tv/videos/784582715?t=01h00m17s

For this particular bug that Sebastian mentioned, CptLucky8 has done a nice analysis of what the problem is and I’m sure if Asobo find that thread, they will find CptLucky8’s thread with CptLucky8’s analysis.

However, I have also read a lot of other threads, even threads in the Bugs & Issues forum, where people report a bug but aren’t giving Asobo enough information to reproduce the bug. For example, for some visual bugs, people don’t even post a picture to demonstrate what the bug is.

Can you please clarify whether this is just because of the 30-days auto-close policy, and if not, is there any better way you’d suggest so that Asobo developers can get the information?

For me it was snake oil salesman talk. But if you were happy and are happy, just keep this setting. For me: enable fullscreen optimizations gives me more frames per second in version 1.14.6.0.

It will depend on a range of factors. What your hardware is, what cockpits you fly, whether you use any external peripherials, multiple displays etc.

Since then I have had 4 CTDs

Yes, I have some CTDs with version 1.14.6.0, too, and none with version 1.14.5.0. Now I do the same as two times before: lower the overclock CPU from 4.1 GHz to 4 GHz. I started at 4.3 GHz. The last two times it helped.
Update: This time, reducing overclock did not help. I investigate my latest “two steps forward, one step backward”. At the moment I run at 4.2 GHz to force the bug.

I don’t have anything overclocked. Just a standard install with two Market aircraft, that’s it.

The stutters might be reduced, but the drawing distance also. Its way not as beautiful as before

This… And particularly if you undock any of the panels (ATC, VFR map) or glass cockpit instruments and drag them to a different monitor. Especially if said monitor has a different resolution than the primary the sim is running on. Doing so with those other adjustments will cause frame rates to plunge into single digits.

After downloading the latest patch , The MFS2020 doesnt load anymore and gives me a message that my game isnt registered in Microsoft store , my gane was registered since sept2020 but after the last update it does not load , anyone faced this issue .
Thanks & regards

Do we know when SU4 will be released? I remember some chatter about WU4 combined with SU4, does this mean WU is pushed back or SU is pushed up?

The Roadmap has WU4 listed as “early April”, whatever that means. My guess is that they’ll be pushing it back after spending 2+ weeks working on the patch / hotfix for SU3. Hence why no fixed date on the roadmap.

I suspect we’ll get a tentative date in this week’s dev update.

How did the patch work for you? Any improvements?

I still get some bad dips into the teens at times in busy areas, and I still can’t fly over London to check out the UK update. Tried taking off from London City on the weekend and I was sitting there at 2 fps.

But all in all, I can fly again with mostly acceptable levels of performance.

Oddly, I’m now able to run at all Ultra without any effect on my frame rate, whereas since the VR update in December, I had to run at a mix of med / high in order to maintain my 40+ fps (was all ultra prior to that). Whether I run at med/high or Ultra, I see neither an increase or decrease in my frames. The only thing that seems to have any effect on that is my terrain LOD.

nice, at least you are flying!

interesting about the graphics settings, I haven’t touched mine in forever, basically running High End with a few things like clouds and stuff switched over to Ultra. maybe I can bump things up, I should give it a go.

You can try. The worst thing that can happen is you have to roll back to what you have now.

I should clarify that the Feedback Snapshot VR doesn’t follow the same route as the rest of the Feedback Snapshot. Instead of listing items in order of votes, they wanted to create a list of developer priorities to share out to the community. This is why you see some missing, as it is instead coming from them and not from a list of top votes.

However if this changes, will let you know. This would change if we move forward with something like a VR-specific wishlist.